Greater Than, Less Than, Equal To — Get your kids to remember the symbols easily!

Numbers by themselves are just meaningless symbols. The reason we recognize that 5 is more than 3 is because we understand there is an attached value to these numbers. Developing this awareness of number values is something important for your children. It is one of the foundational blocks of mathematics and numerical understanding and reasoning.

When comparing numbers, we find ourselves at the K-5 level with 3 symbols.

< represents “Less than” as a sentence.

If we translate this into a sentence, we have: Five is less than six.

> represents “Greater than” as a sentence

If we translate this into a sentence, we have: Eight is greater than three.

= represents “is equal to” as a sentence

If we translate this into a sentence, we have “Eight is equal to eight

By itself, this is a relatively simple concept as an adult. However, for children, learning the difference between < and > is the same as learning that “d” and “b” are different letters. They are easily confused when first starting it. To help your child better understand and remember symbols, I remember how I was taught as a child : the symbols are alligators. 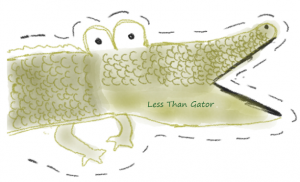 Having objects to manipulate and use are extremely important for young learners. Giving them quantitative concepts without a physical representation in the world is setting them up for a much more difficult lesson than is necessary.

Take a look at the example below

We have two numbers here. 4 and 5. You can ask your child which one the alligator wants to eat and remind them that the alligator will always eat the one that has more. Once they have chosen which alligator, have them speak out the sentence with the mathematical equations. In this case:

Four is less than five.

Five is greater than four.

Use our printable PDF to play and learn with your child! In it, you will find cutouts of the alligators, different value boxes with foods inside them, and a few activity ideas.